Victim of an Internet Troll Abuse? 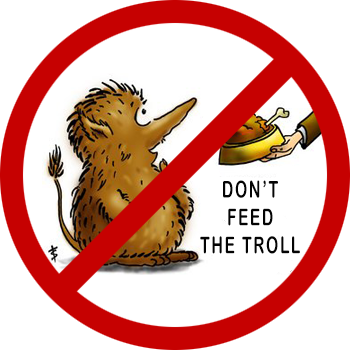 You do not know what’s a TROLL on the internet? A troll is a person behind an Internet connection, a computer or mobile phone aiming to harm someone. It can be defined as an unstable person, harassing one, but it is first and foremost a new class sociopath.

Definition of a sociopath

The most accurate definition of a sociopath is “Person suffering from a personality disorder, disorder often characterized by a general trend vs disregard social norms and cultural codes as well as emotions and the rights of others, and/or impulsive behavior. “

So it is important to know what tis he little beast before tracking it down. A TROLL during a discussion or comment, do not want to shed light on the truth, clarification or express an opinion like any normal person. The TROLL rarely even know how to discuss a topic intelligently, his only concern is to inflict pain, humiliation, ridicule, harass the person or the organization.

The aspect that stands out for a TROLL is accusation. He distort and conclude with a charge. Misinformation, lies, exaggerations, impulsive behavior and recurring e-mails or comments are his tools of torture.

The TROLLS do not follow the rules, it is not for them. Cases of abuse on the internet are often regulated by terms of use that can lead a user to be banished if he does not respect them.

The TROLLS (if they are banned), will try to come back with a different user name, or focus their sights on another person in the entourage as they are : sociopaths.

So they want to disrupt, spend their offensive messages because they are devoid of morality, logic and conscience by the fact of their personality disorder.

How to deal with a TROLL?

There is a term for this: “Do not feed the TROLL.”  Do not contribute to the conversation, do not answer, let it go. The TROLL  has a communication disability, without your answers, he will be taken down.

Ignore it but act to contain it. The actions you can do are:

– DO NOT TOLERATE INTIMIDATION AND THREATS;

– Inform site managers about remarks and harassment by the troll. Any respectable website take measures on bad comments, messages and publications;

– File a complaint if that individual uses services such as Hotmail, Yahoo … These free email services can identify IP addresses, messages and content for future evidence in court;

– File a complaint to the police for criminal harassment. The police department take harassment on the Internet and social networks really seriously.

It all depends where your TROLL attack. If it’s on social networks, your web site or another organization, the measures are different. Once you have the conviction of being the victim of a TROLL, first follow the steps mentioned above. You can use too the comments masking options like:

These tools are at your disposal to filter comments made byt TROLLS, use them, they are free!